Spring Has Sprung at Macy’s

It’s that time of the year again – the annual Macy’s Flower Show! This year’s theme is “America the Beautiful.” And oh, yes it is. This event really grows (lol) each year and with it becomes more and more impressive.
Here’s your mini history lesson on the show: the first show debuted in Union Square, San Fransisco in 1946. This included a few small potted plants, but it sure shot out of the ground (sorry it’s just too easy) pretty quickly. New York’s Herald Square quickly followed up with an even larger show in 1953. The show is now seen in 5 cities including San Fransisco, New York, Philadelphia, Chicago, and Minneapolis. I’ve learned three weddings have been held at the show, The Today Show has reported live from the Macy’s Flower Show, and the Daytime Emmy Award Nominations were once announced from the show. As you can imagine just from these stats, it’s as big and beautiful as it sounds.
As far as the actual flowers and other plants at the show, they’re all received from local florists and their nurseries. The most difficult part of this planning is making sure all the flowers bloom at the same time and by day of show. I don’t know much about floral design, but I can imagine trying to coordinate over a million plants to bloom at the same time is quite the task. I mean come on, I can’t even get three of my friends to agree on a time for brunch. Fun fact though, should a rebellious flower slip up and bloom a little late, it can be used for the “half show refurbishment”, which is when the Macy’s Parade & Entertainment Group plans for about half of the flowers to loose their spunk after a week or so and they’ll be replaced. What I didn’t find was what they do with the half million flowers that die that need to be replaced so soon – I sincerely hope they’re planted elsewhere to brighten someone’s day instead of just being thrown out.
Here’s a few of the smaller displays on the ground and 2nd floor. 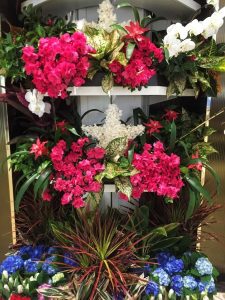 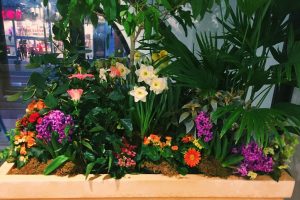 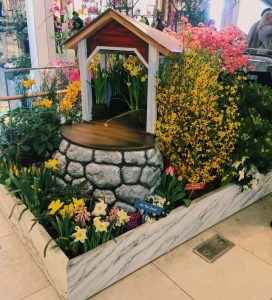 A few of the displays in store were sponsored by different brands, but each of these pictured were designed and produced by the Marcy’s Parade & Entertainment Group.
Here’s some of the pictures that will make you understand the theme “America the Beautiful.” These are only a few of the main garden displays, but in total they include The Enchanting Southeast, The Majestic Rockies, The Midwest Plains, The Pacific Northwest Wonderland, The Vast Southwest, and The Shining Northeast Shores. Each main garden display was made up of only a few different types of plants that represent the area it’s named after.

Because after all, this show is a tool to bring consumers into the store, as if the beauty of all these gardens aren’t enough to bring you into the store, they also offer discounted packages with bags commemorating the event and coupons worth percentage discounts off your purchases all day. While these packages are sold for $50, you can use these coupons on most items, so if you receive 25% off a $600 Burberry coat, well that’s more than worth it to me. Then again, this is exactly what they want you to think. 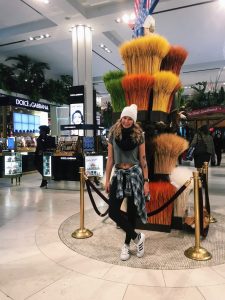 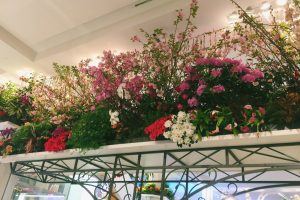 This is an annual show usually around the end of March, so if you missed it this year (it ended April 3rd) I definitely suggest you make it a point to visit this Spring celebration! Just check the Macy’s website in February to see the exact expected dates for that year.

The only picture I didn’t take in this post is the one directly to the right, which was taken by Cassidy Colpoys.