Xi’an is probably my favorite city that I’ve visited in China yet, you get an authentic Chinese vibe of a city that has been built up and has the chain food restaurants and commercial shopping, but is still mostly made up of street food and locally run restaurants and eateries. 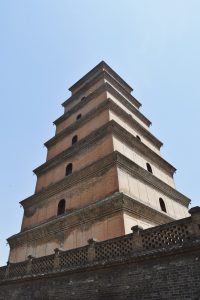 There’s plenty to do in Xi’an, and because most of the inner-city attractions are within walking distance of eachother, you can get a lot done in one day! Because there were only five things I wanted to do here, I only allowed two days and one night for this trip and I found that was plenty of time.

I arrived at my hostel at 11am after taking an overnight train (and getting lost on the bus system a little.) I then dropped off my things, had a bite to eat, and made my way to the Big Wild Goose Pagoda. There is a beautiful park around this area with beautiful places to sit, and they even have a fountain show. When the fountain show isn’t active, you can see children playing in the occasional fountain bursts. It costs 50¥ to get into the square surrounding the Pagoda, and 30¥ to actually go up into the Pagoda (half price for students.) I would definitely recommend going up to see views of the surrounding city. 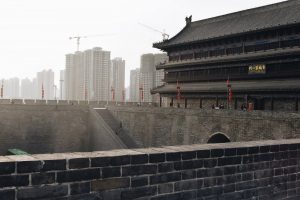 After this, I took a little break to eat, then made my way to the Southern Gate of the Ancient City Wall. (There wasn’t much to eat around here, so looking for somewhere took some time.) I then went up on the wall and rented a bike, which was only 45¥ (about $6.60) for two hours, but the deposit is 200¥, so make sure you bring enough cash. You can bike the entire city wall within 3 hours, and that’s including time spent taking pictures! 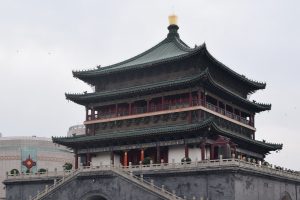 The next day I checked out of my hostel and made my way to the Bell Tower to get some photos before it got too crowded. I didn’t bother going up into it, because it didn’t seem like the views would compare with those of the Big Wild Goose Pagoda, so instead I walked around and admired it from the outside.

For lunch, I made my way to the Muslim Quarter. I’ve read before that vegetarians shouldn’t even bother visiting here, but I think that’s ridiculous! I managed to remain vegetarian and ate until I was stuffed. This neighborhood has food for all tastes, and I had some of the best food that I’ve eaten in all of China there. 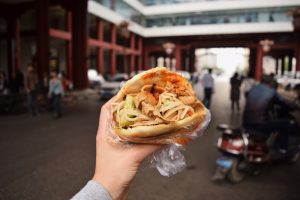 The main attraction of Xi’an is the Terra Cotta Army – and for good reason! Beware, this is about an hour bus ride out of the city, but well worth it for a half day trip. The bus will drop you off right outside the Museum grounds, but after you purchase your entrance ticket, you’ll have to walk about 20 minutes along an outdoor trail or take a 5¥ bus to the pits where the actual museum buildings are. The warriors were an amazing sight, and if you read some brief history on the excavation and meaning of them, you’ll have a much greater appreciation when you see the incredible works of art. 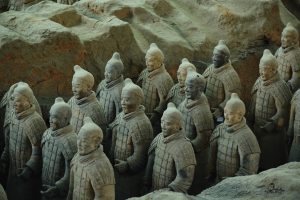 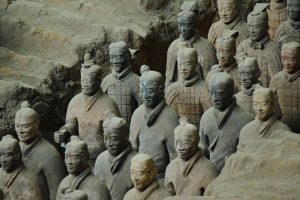 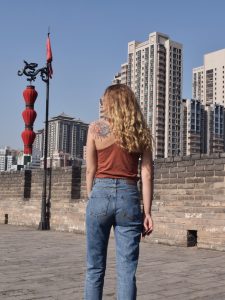 By the time I visited these three attractions, I still had a few hours to explore the city before my train left – so that’s exactly what I did! Though after biking around the City Wall you can feel like you’ve seen it all, I always like to explore the small streets that tend to say much more about an area than the obvious points.

Because this was a very relaxed city, I wore a pair of high waisted mom jeans from Monki, and a different colored neutral tank top for each day. The nights get extra chilly, but I just threw on a slightly cropped sweatshirt and kept it going!